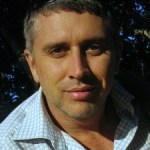 Although Casey has been writing for over twenty-five years, Xavier Wintersbee and the Book of Virtues is his first published full-length work.

With a knack for avoiding the road most travelled, Casey completed a degree in Mechanical Engineering after high school, only to then travel the world, finding work in every industry but engineering. Over the past two and half decades, he’s been a Hotel Manager, a Foreign Currency Trader, a Yoga Teacher, a Swimming Coach, a Finance Manager and a Business Consultant – not necessarily in that order. Even completing a Master of International Business couldn’t keep him on the straight and narrow, as now he’s an author.

Casey’s cinemagraphic style pulls the reader into the story side by side with the characters. In this case, you find yourself alongside Xavier Wintersbee and his friends on an action-packed adventure through the forbidden reaches of Cortoza.

His inspiration for again putting pen to paper on a storyline he had begun over twenty years ago was his two boys. Fabricating stories to put children to sleep is not always an easy task – but when all you have to do is set the scene, a little imagination goes a long way. And so each night, the characters of Cortoza began to take shape – and each day, Casey furiously added detail to his growing manuscript.

In adapting the original storyline, Casey chose to add a moral element to the book – the idea being that it would act as a guide for his young boys. So he devised a storyline based upon a mythical Book of Virtues.

In this, the first in a series of four books, the message is Patience – it’s what the Shahili call the first virtue.

Sign up now to receive the first six chapters of Xavier Wintersbee and The Book of Virtues FREE!